To Be Mentored Or To Be Coached 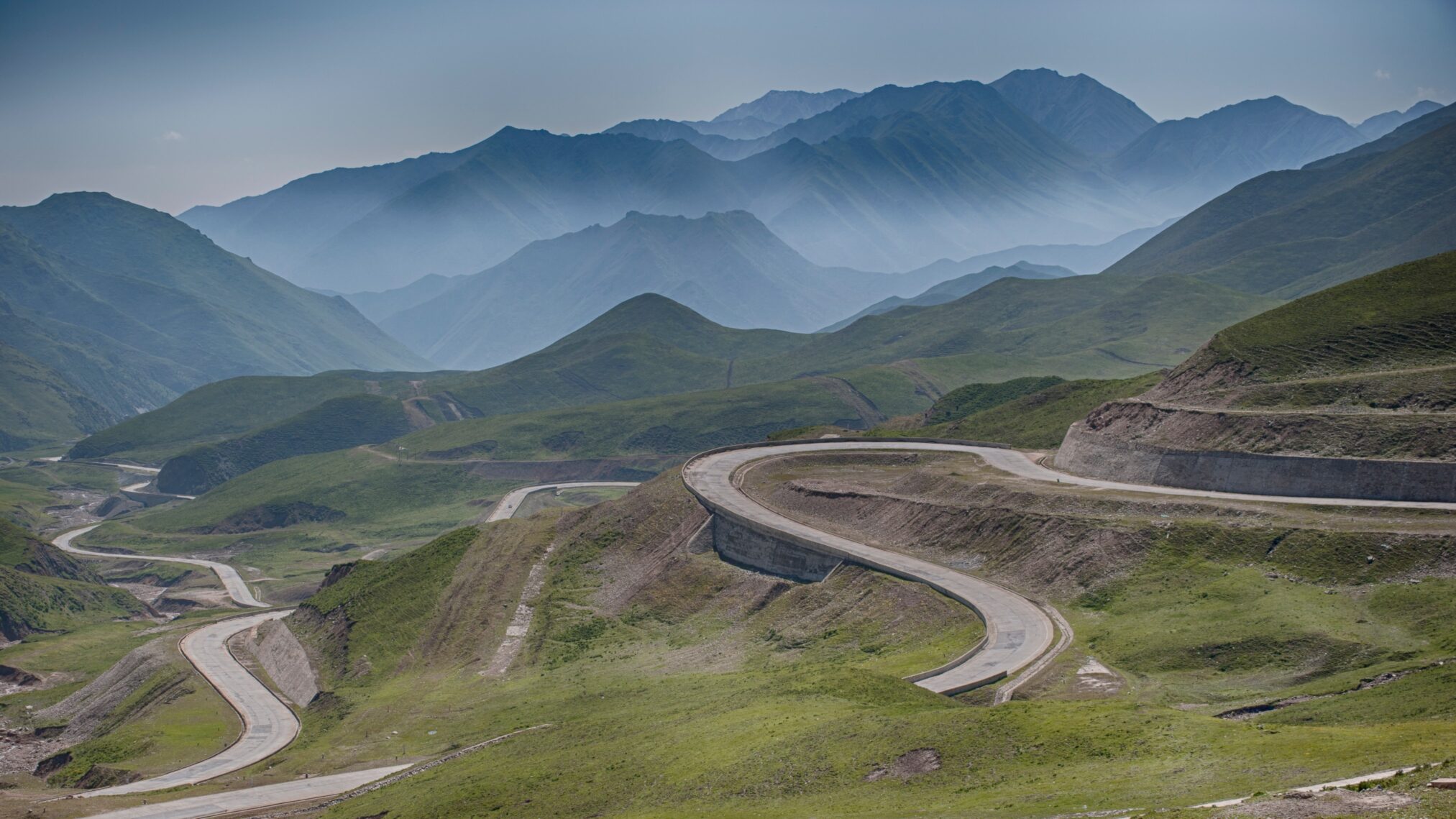 Photo by Yux Xiang on Unsplash

If you need help as a first-time manager will you look for a coach? Chances are you will not. In a study commissioned by the International Coach Federation they found that 87% of coaching clients first sought different modes of getting help (like mentoring, therapy, or talking to family or colleagues) before turning to coaching. So coaching is definitely not the first thing that comes to people’s minds when they need help.

Mentoring is wide-spread and intuitive: you look for an experienced person who has done things you are trying to achieve so that they can tell you what to do.

Then, when would it make sense to be coached rather than mentored?

Let’s start by expounding on the difference between how coaching and mentoring work.

Imagine Peter (not a real person but inspired by many clients I’ve had) who recently was promoted to a team lead role. Peter finds it hard to stop doing individual contributor (IC) tasks. He really wants to. That way, he could focus more on higher-level responsibilities. But no matter what he tries, he’s still there–busy with IC tasks most of his time.

Problems like these are caused and perpetuated by a complex interplay of Peter’s thoughts, actions, beliefs and so on. To get to the desired state he needs to internalize a different set of actions, thoughts, and beliefs. 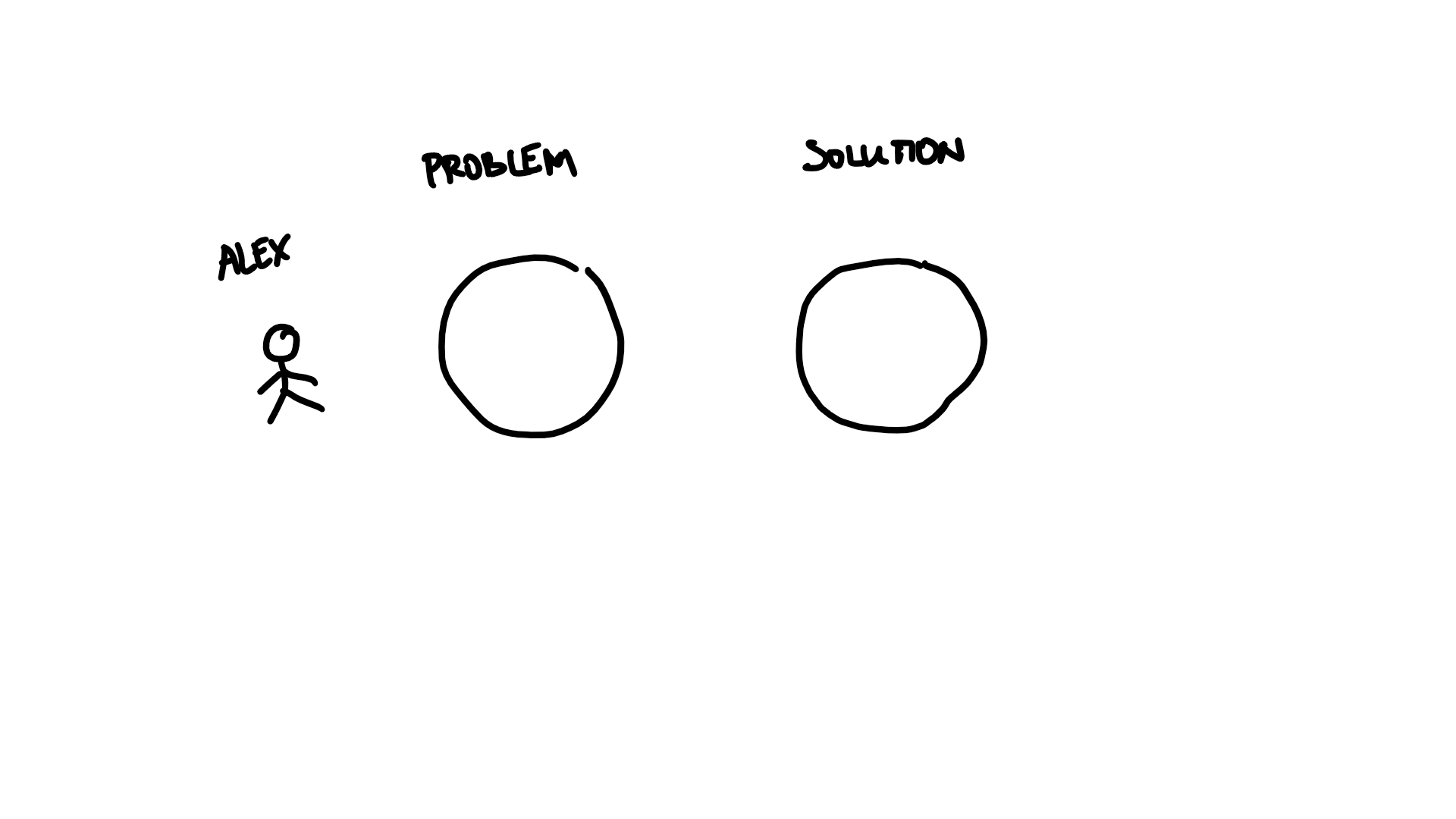 The problem is part of Peter’s reality, the solution is outside of his reality. 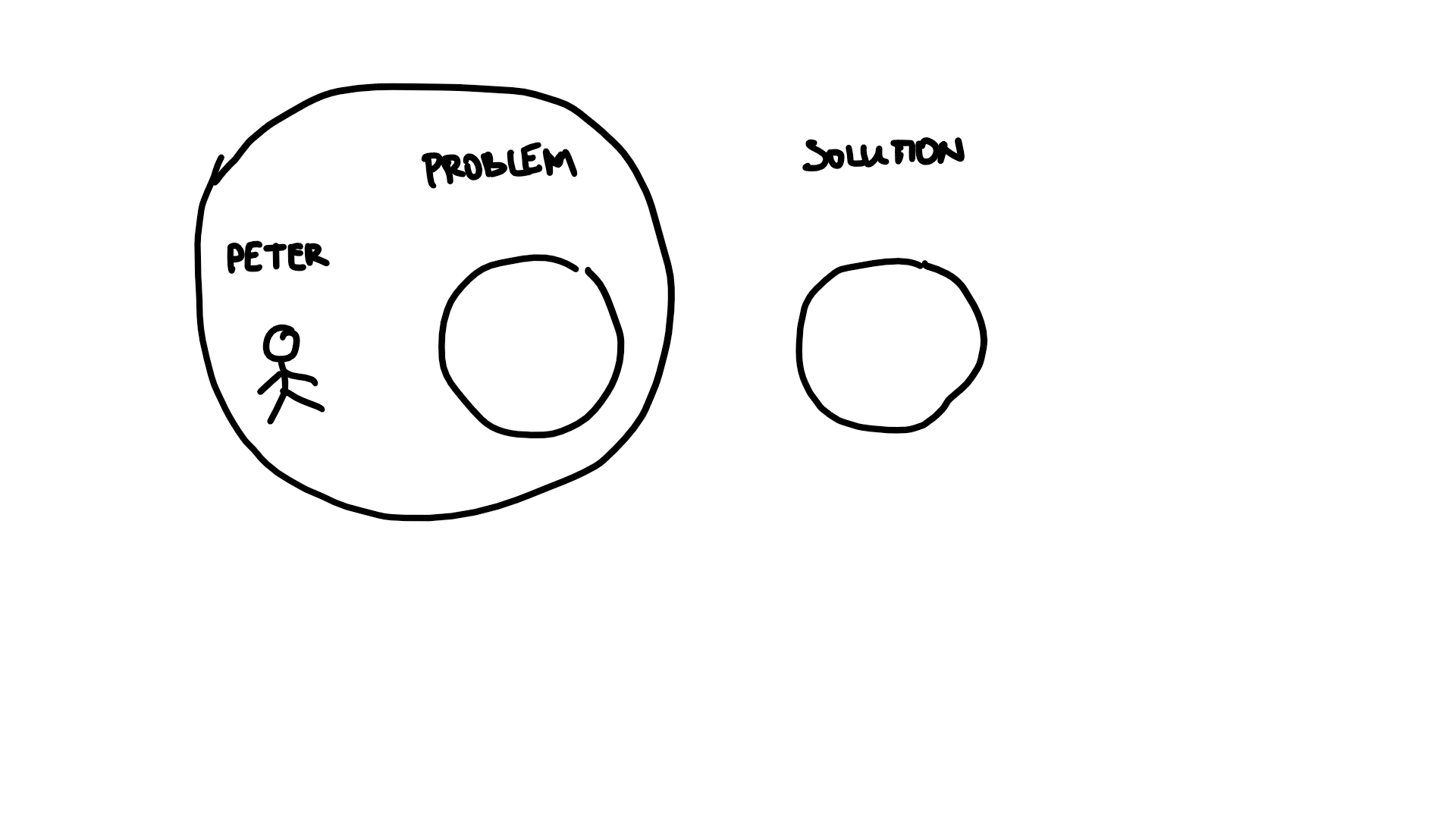 If Peter chooses a mentor, he looks for someone who knows how to stop doing IC tasks. That person has a respective new set of thoughts-actions-beliefs as part of their reality. 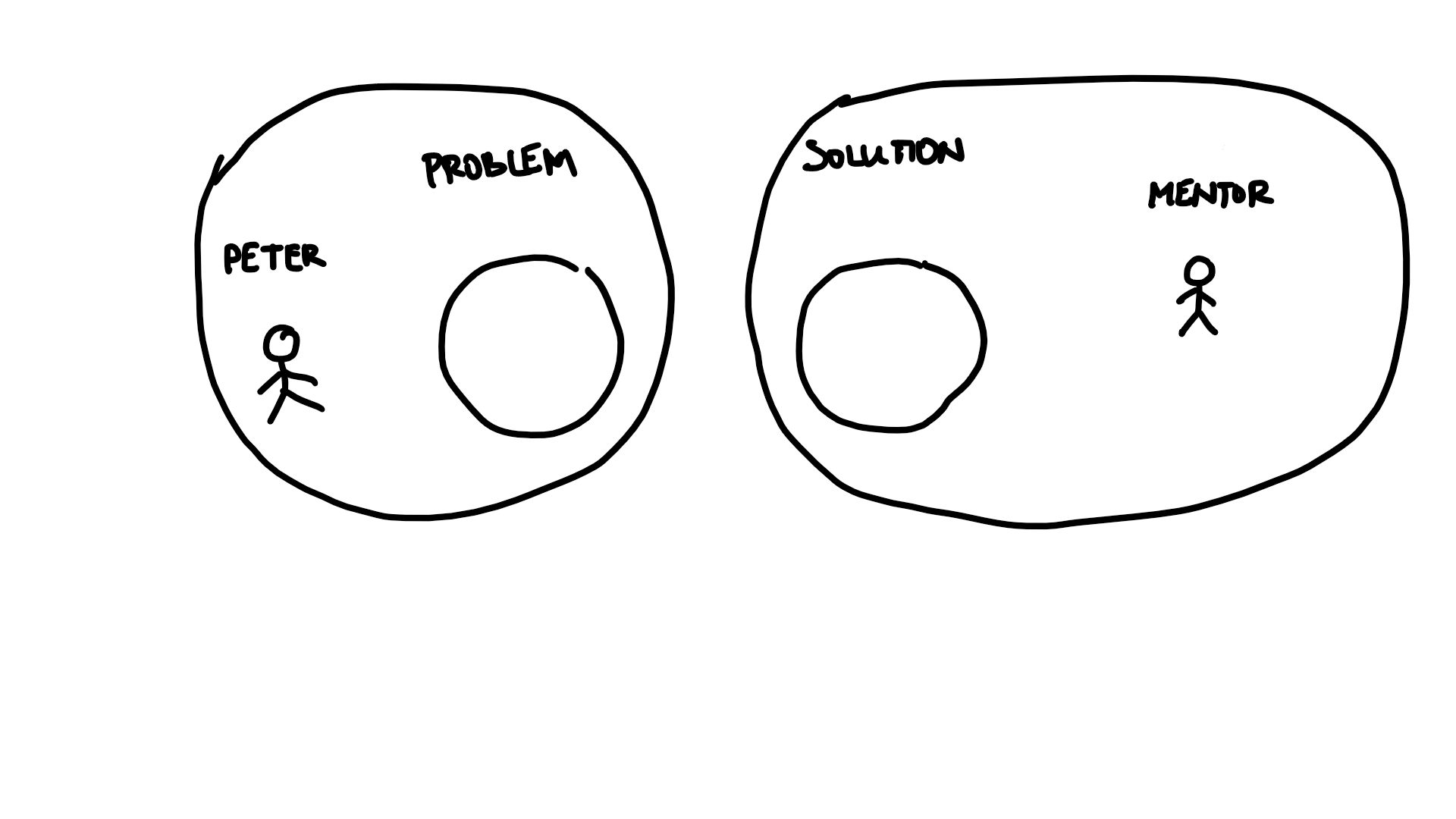 Peter wants them to introduce this solution into his reality. 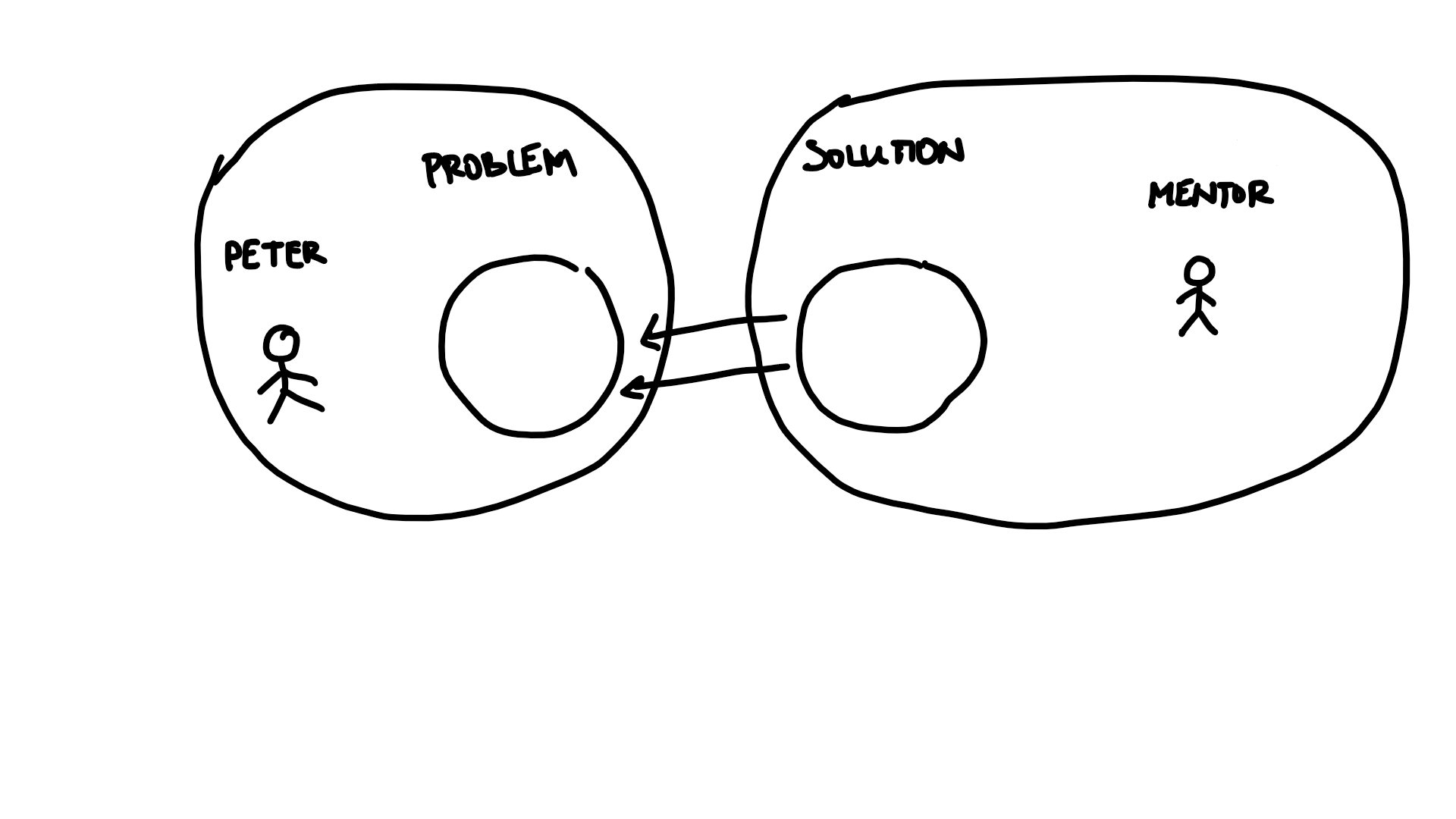 On the other hand, coaching starts with a belief that a solution is already accessible to Peter (even though he may not be aware of it). That’s why Peter doesn’t need to be directed towards a solution. Instead, once he’s allowed to think deeper and explore different aspects of the current situation he will see opportunities to solve the problem. 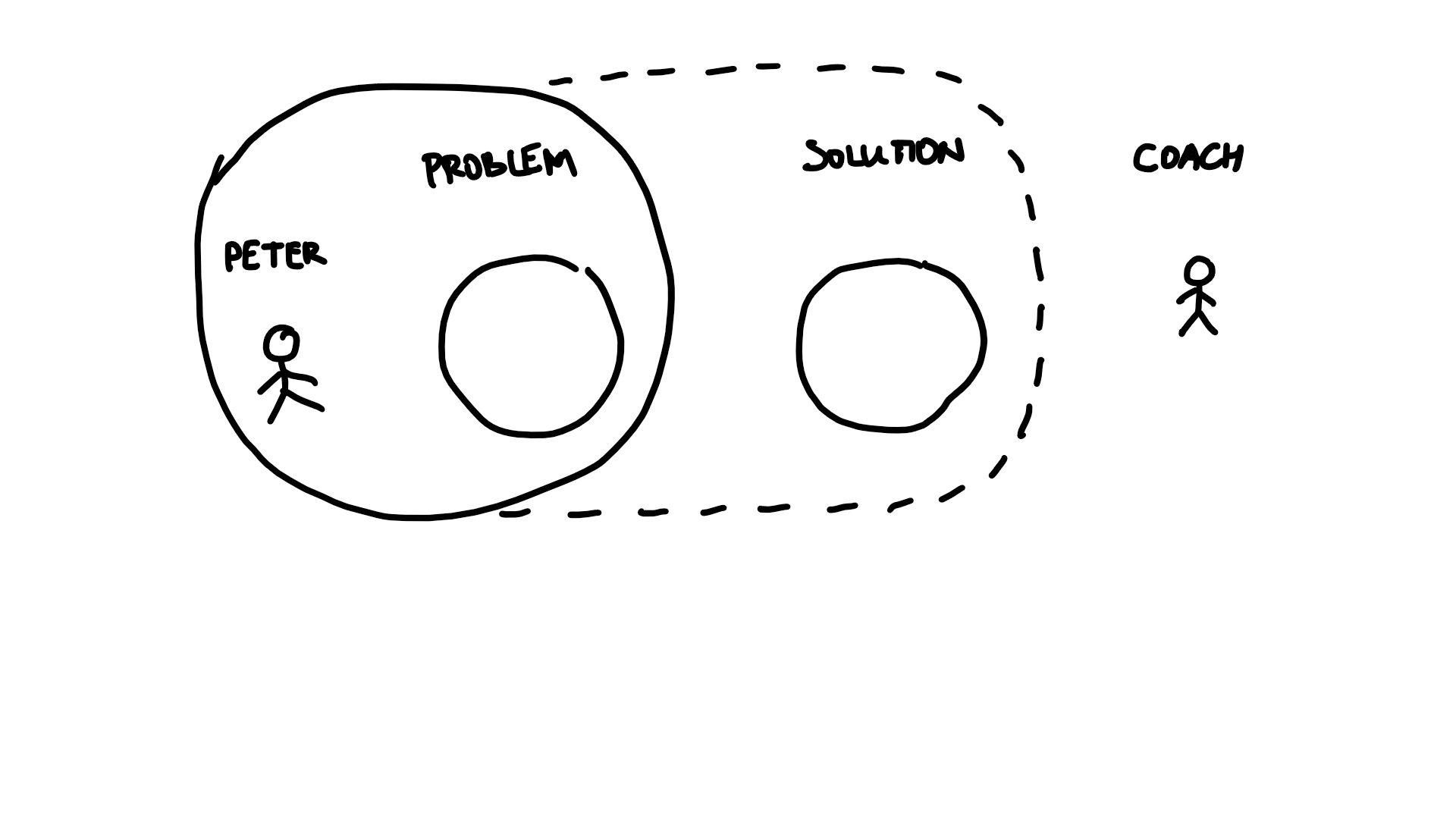 Coach expands Peter’s awareness to the level where he can confidently create and own his solution. 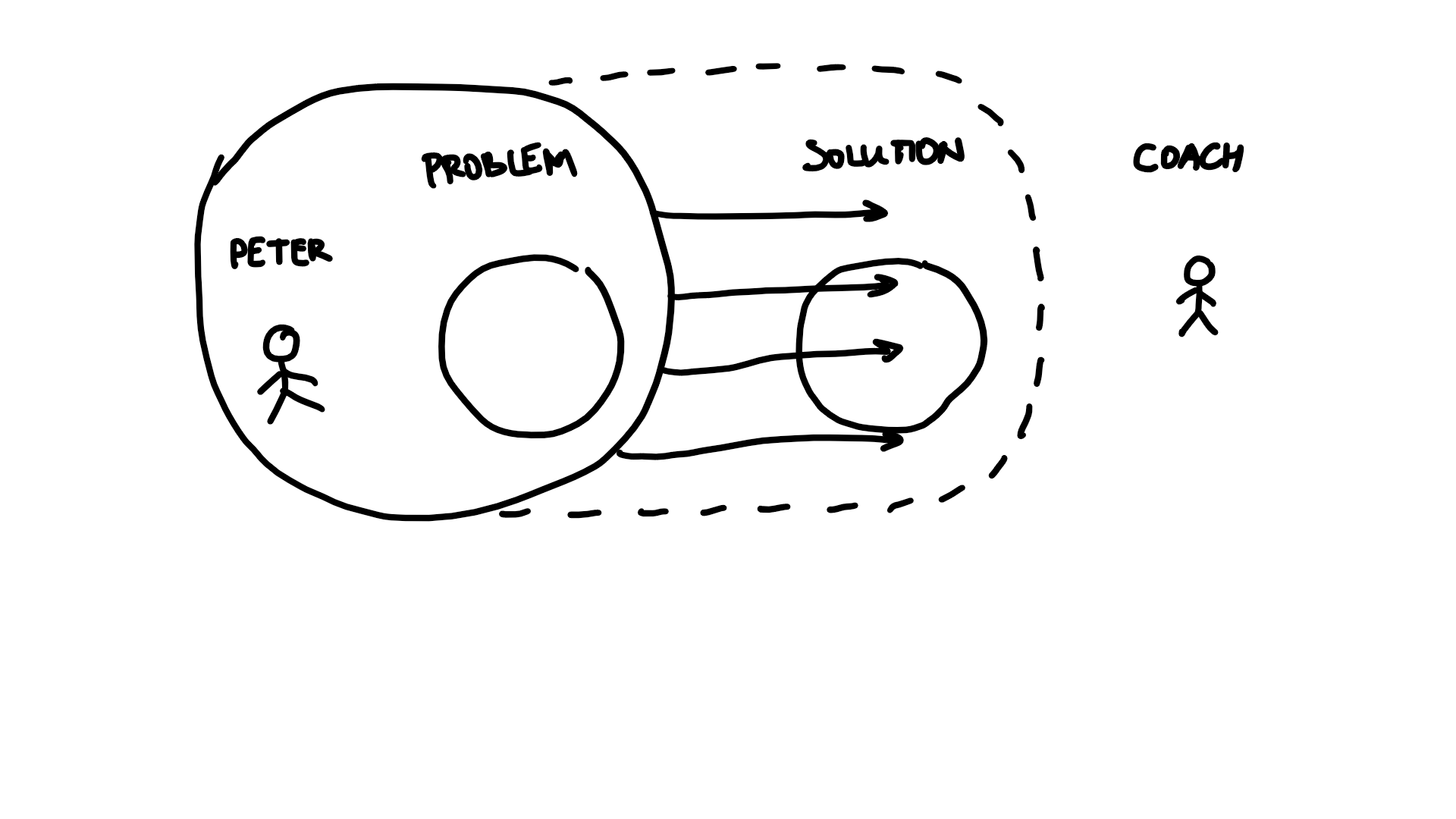 A coach can start by creating a safe space where Peter can be open and vulnerable. Peter with his coach will explore why the attempts to stop doing IC tasks were unsuccessful. That will lead to a hidden belief that Peter’s confidence comes from doing technical tasks. He’s afraid that if he stops doing them, he will lose the respect of his team.

Coach’s role is that of a catalyst. He helps Peter get to the level of awareness of what he wants to achieve and what needs to be done to achieve it so that Peter can easily figure out the steps required to get there. All the ingredients are already there, the coach just speeds up the reaction.

Based on this explanation you can see that coaching and mentoring follow different processes. Generally, these will be the steps: 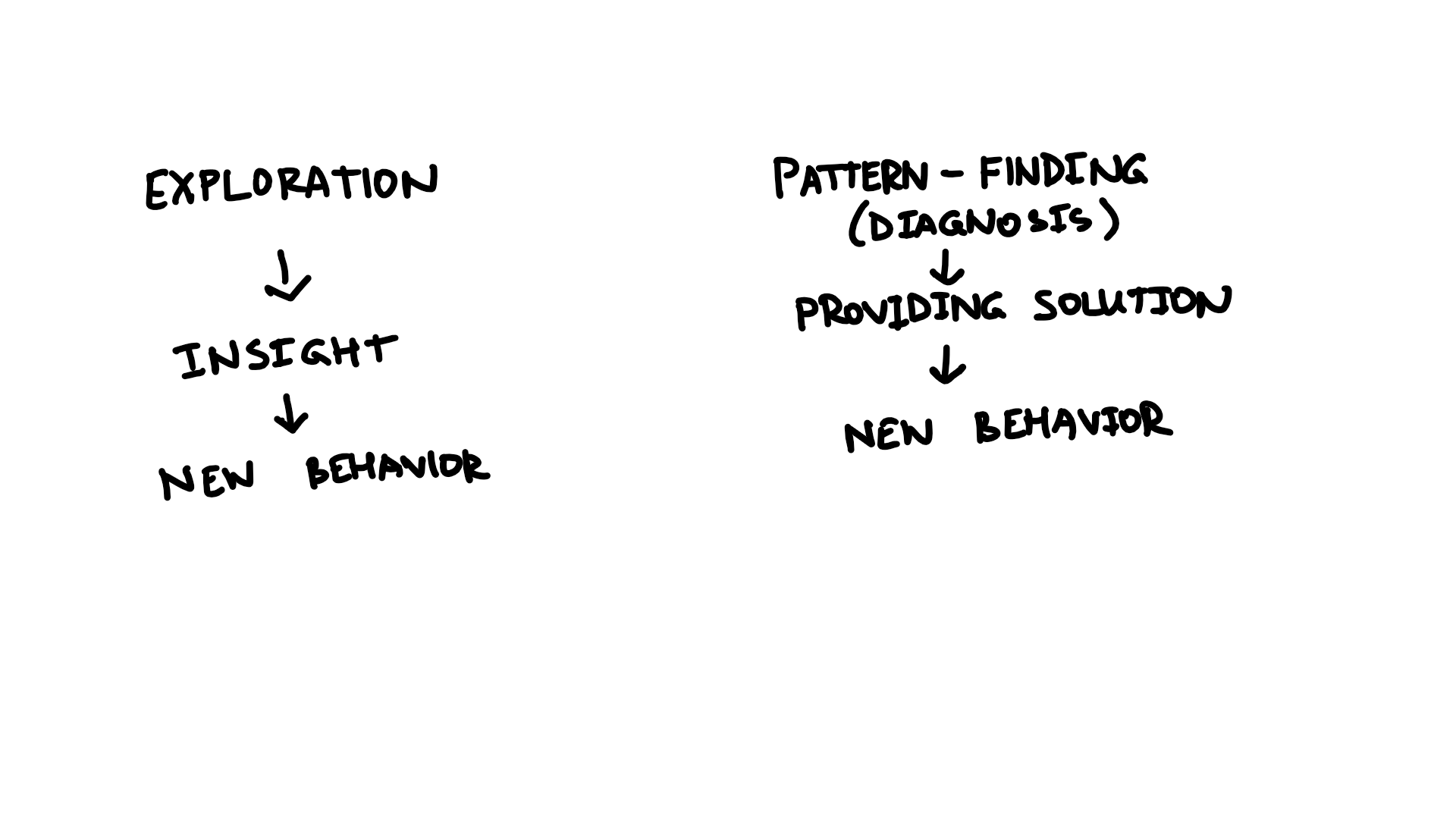 Now having talked about the distinctions between two approaches, when should you choose one rather than another? Of course, there is no easy answer to that question. But there are a few guidelines you can consider:

1. How much clarity do you have about the problem? You surely know that something is bothering you but how certain are you about where the root cause of the problem lies?

The more clarity you have about your problem, the easier it will be for a mentor to recognize a similar pattern and then help you with his or her experience.

The hazier your understanding of the problem is, the greater the chance that coaching will be a preferable approach, as coaches are trained in inquiry skills and trained to listen for subtle nuances to get to the core of the problem.

2. Who can you trust? No matter what the approach is, it won’t work if there is no rapport and trust with a helper.

And a lot of times, it’s easier to build trust with people who’ve been there and done that. Mentor’s expertise gives them credibility that allows them to develop trust faster.

Also, if you find it harder to open up to an ‘outsider,’ you better look for someone who is more of an expert in your area.

3. What is the nature of the problem? Is it related to the ‘inner’ or the ‘outer’ game?

It’s much easier to transfer skills compared to beliefs or mindsets. So if the problem is solely related to behavior, a more directive approach of mentoring might be preferable.

But if the problem lies deeper or if you feel like there is some internal resistance, the other person’s experience in a similar situation will be less helpful.

In the above example, although the problem sounded like it was related to delegation, no amount of great advice on delegation would have helped before the limiting beliefs were addressed.

So the next time you are riddled with a problem, think about these guidelines. And if your default urge is to look for someone who knows what to do, reconsider. Maybe a more explorative coaching approach will help better?

If you want to learn more about coaching and how you can use coaching skills join Tech Leaders Coaching Club free community to get support in your coaching journey. Just fill out this form to join it https://forms.gle/eoM1zM18xsZH9yGMA

Latest on the blog
Purity of Intention

Photo by Inggrid Koe on Unsplash Understanding why we do what we do leads to a more fulfilling and satisfying life. That’s an assumption I start with. If you disagree with it probably you won’t agree with what follows in this blog. Imagine a fictional but very realistic newly promoted manager. Let’s call her Jane. […]

Photo by suntorn somtong from Pexels Technical leaders often experience the same issues. I’ve coached hundreds of them all over the globe. And, again and again, I found myself sharing the same similar tools, exercises, and models with them. In this series of blogs, I’ll be sharing the resources that are most helpful to my coaching clients. This […]